Flask vs Django | Which Framework To Choose For Development? 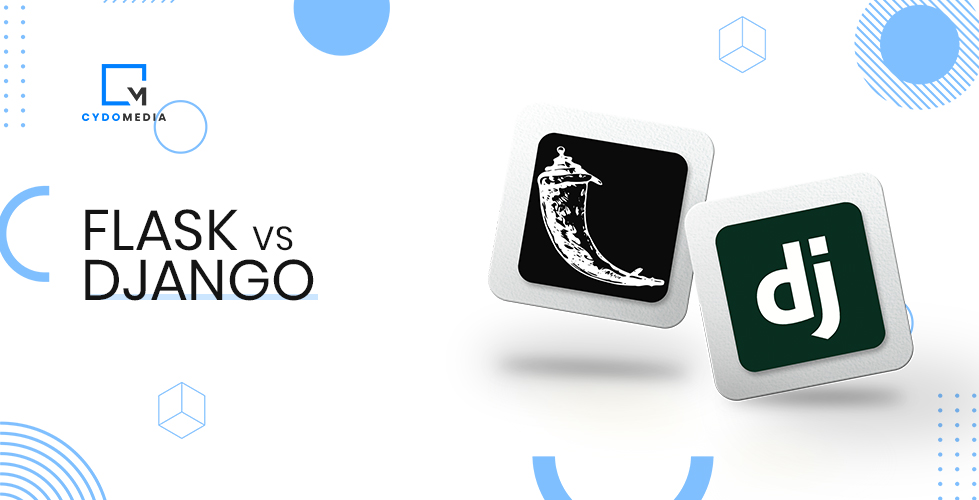 Flask vs Django? Many Python-based web frameworks enable developers to build websites without coding with a hundred percent scalability, and seamless interaction. More or less, talking about both the frameworks, Flask vs Django, developers have to be perfect and experienced enough to deal with the consequences and fix the bugs instantly.

To help you understand python Flask vs Django frameworks, I’m writing this blog with authentic information to drive the choice factor well justified. However, if you’re seeking professional web design & development services, you can choose us to do the needful.

Let’s start the conversation discussing the core difference between python Flask vs Django in detail;

What is Flask in Programming?

Before we start with Flask vs Django comparison, let’s learn what Flask is? A light-weighted framework known popularly for developing web applications. Python Flask is a microframework offering the basic features of developing a web application. Flask framework has no dependencies on external files and libraries. Moreover, the flask framework offers extensions for validations, object-relational mappers, open authentication systems to uploading mechanisms, and other development tools easily.

Flask stands between the top-most python development frameworks with a simple. Innovative and easy-to-use mechanism. So, if you’re craving flexibility in the website, then Flask can be your choice. Moreover, it comes with several libraries to learn about API through the documentation available on the website.

So, if you’re a python developer, start your core development through Flask to get an idea of both backend and frontend development.

We have an exciting blog discussing the difference between scripting and programming languages. You can give it a read to excel your knowledge.

Some of the top-tier features of the Flask are as follows;

What is Django? How Does Django Work Python?

Similarly, before jumping to the core Flask vs Django comparison, let’s learn what Django is? Django is a free & open-source Python web development framework. Some people also search for Marketo vs Eloqua & HubSpot vs Marketo to improve their understanding; you can read our blog to get an idea of both!

Django is a web development framework following Model-Template-View (MTV) pattern. So if you’re a developer, all you need for maintaining your online presence is a digital website. Django is free to use and has a beautiful interface.

Django vs Flask focuses on re-building and reusing components, with less coding and rapid development. The key influence behind Django development was Zope and Plone, including Pyramind, CherryPy, Bottle, and Web2py.

Some of the fantastic Python Django features are as follows;

Python Flask vs Django – Everything You Need To Know About It

Everything you need to know about the difference between Django and flask framework in detail;

Honestly, you’ll have a big hang of it a bit by now – I tried to mention all the necessary information related to python Flask vs Django. While Django is a full-fledged development framework, Flask is a micro-framework with complete control. Nevertheless, a head-to-head comparison is required to drive the discussion and make everything well justified.

Let’s start the head-to-head discussion leading towards a decision.

Python flask is a lightweight framework with minimal features, whereas Django is a web framework with a batteries-included approach avaliable for free. Undoubtedly Django wins here in Django vs Flask.

Django is a simple yet powerful ORM, supporting many relational databases out of the norm, like PostgreSQL, MYSQL, Oracle, and SQLite. Whereas Flask does not assume data storage still, there are a lot of extensions valuable like Flask SQLAlchemy, Flask-Alembic, Flask-Peewee, and Flask PyMongo. So, if you’re looking around for relational databases, then Django is the best choice as it has a built-in ORM whereas, Flask gives you the freedom to pick any ORM that best works with your application.

However, for this freedom you’ve got to pay, which is quite expensive! It’s a tie between both frameworks.

3. Authentications in Flask vs Django

Since many web applications require basic information like authentication and authorization, Flask-login and principles are available for the users to read and understand. Django provides this complete functionality and account management, whereas and Flask offers cookie-based sessions, so you have to turn to the network extensions for account management and authorization.

4. Administration in Flask vs Django

Talking about administration in Django or Flask, Django comes with a functional admin panel, a web application providing users interface to interact with the management of databases. Flask is a way behind in administration and doesn’t ship well in flask-admin, offering a wide range of functionalities.

However, if you wish to read about Shopify vs WordPress, feel free to read out exciting blogs enriched with quality points!

Undoubtedly in Flask vs Django performance and administration features, Django wins the race with flying colors.

5. Routing & Views in Flask vs Django

Want to know which one is best, Django or Flask in routing? Read below …

When a request matches the URL, the request object is a password to view, and that view is invoked. URLs and views can be defined in different files, whereas, Flasks uses Werkzueg, which provides the URL routing and response handling feature.

Here, Flask takes the lead against Django for routing and viewing purposes.

If you’re a website manager who does website maintenance and management, you must be aware of the importance of forms. Django comes packed with forms, handling security concerns like cross-site request forgery, cross-site scripting, and a lot more themselves, whereas Flask doesn’t support this functionality by default. However, the powerful Flask-WTF extension integrates it with WTForms automatically.

Here, Django takes the win with built-in forms functionality for the developers.

Django comes with a concept of the application, whereas, Flask maintains blueprints. Django applications are complex than Flask blueprints but tend to be easy and easy to use once you’ve successfully set them up. You can easily add new developers to the Django project, whereas blueprints, on the other hand, are simple, easy to use, and set up.

Here, the choice is quite tricky, but as blueprints are easy to handle and simple to use, we’re giving one point to Flask.

The eighth attribute which we’ll see in this blog of python Flask vs Django is template engines. Template engines allow you to inject information dynamically to the pages from the backend. Django comes with a built-in ready-to-use template engine saving a lot of development effort and time. Whereas, Flask temple engine Jinga2 is somehow based on Django template engine.

So, again Django wins this category, and it’s an obvious win …

We have a fantastic blog writing on Maya vs Blender, a tremendous head-to-head comparison to enhance your knowledge!

Talking about Flask vs Django regarding security concerns then both the frameworks comes with built-in support for testing. Both frameworks leverage python’s unit test available for requesting and inspecting the websites.

Here is a tie between the two, so giving a number to Flask and Django both!

Django has quite impressive built-in protection against malicious attacks, like CSRF, XSS, and SQL injection. Django development has proactively disclosed and fixed a lot of security concerns to give users a fantastic experience.

On the other hand, Flask has a smaller codebase, so the ratio of attack is less. However, if you wish to fix those addresses, then a lot of critical thinking is required. Summing it up, Flask is much more reliant on third-party extensions, which is, of course, least secured. Whereas Django is much easier to secure upfront during the lifetime of your application. So, the extra point is for Django;

Concerning design, Flask is more flexible, whereas Django is not! Whereas, in Flask, developers have the freedom to do whatever they want to solve any bug, but they have to pay for this. Flask generally takes more than the expected time to set up because of the appropriate extensions required to fix the business needs. However, a mature team is required to handle the Flask designing patterns and scalability.

So, the winning team is evident in this category;

However, Flask vs Django are both famous, but it’s hard to hire a Django developer with complete knowledge to deal with the bugs and development concerns. Because of the rise in microservices, developers learn more about lightweight languages, picking Javascript over Python and Ruby.

Moreover, Django beginner tutorials are not available easily on the Internet, making it difficult for the users to perform all the development activities. In a nutshell, Flask developers are also hard to hire, but as it’s easy to understand, developers are more towards such frameworks, whereas Django is complicated and requires expert knowledge to develop using the framework.

Talking about performance in Flask vs Django, Flask performs slightly better as it’s smaller and has few layers. At the same time, Django is a bit slow in performance.

15. Use Cases Designs For Django vs Flask

Lastly, we have use cases attribute, so let’s see which one is more proficient, Django or Flask? Django was designed for the fast development of complex web applications, providing developers with all the necessary tools for implementing scalable frameworks. Whereas, Flask is a simple framework used for creating smaller web applications.

Clear much? Here Django takes the lead and wins the head-to-head comparison between Django and Flask.

Flask vs Django? – Projects Build With Both Frameworks

In this section, we’ll shed light on the applications that are built using Django or flask frameworks in real-time so that you can have a better idea about both frameworks working styles;

Which Projects are built with Django?

The most popular Django projects, mainly the developed projects, are social media applications, so you can imagine the traffic these applications must handle without any crash issues reported until now!

Which Projects are built with Flask?

Flask usage amongst the users increased from 41% in 2017 to 47% in 2018, a benchmark. Flask is an open-source framework with a lot of packages available easily. By the end of 2021, the volume of open source packages would reach up to 1.5 trillion, a 50% increase from the previous years. These are a few world-famous companies built with Flask:

Are you looking out for java project ideas? Read our blog & get exciting ideas related to projects developed on the Java framework.

And yes, you must be clear with Flask vs Django and why these two are some of the most popular development frameworks in today’s time. Django is a toolbox, whereas Flask is a hammer! If you’re running short on time and have a limited budget, Django is the best one for you! Whereas, if you a small or mid-level project with custom requirements, Flask is good for you.